Official websites use .gov
A .gov website belongs to an official government organization in the United States.

NIH’s mission is to seek fundamental knowledge about the nature and behavior of living systems and to apply that knowledge to enhance health, lengthen life, and reduce illness and disability. To achieve this mission, NIH invests in research to improve public health; it also devotes substantial resources to identify, develop, support and maintain its scientific resources, including human capital. NIH’s ability to ensure that it remains a leader in scientific discovery and innovation is dependent upon a pool of highly talented researchers. Promoting diversity in the extramural scientific workforce is critical to the success of the NIH mission.

The Importance of Diversity
“The diverse group almost always outperforms the group of the best by a substantial margin.” — Scott E. Page 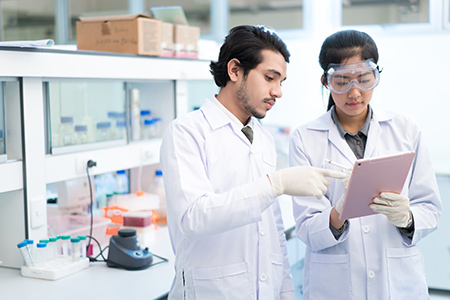 NIH is interested in the benefits of a diverse workforce on scientific discovery, with a focus on enhancing the pool of individuals from diverse backgrounds including those nationally underrepresented in biomedical research. A strong, creative and diverse research workforce requires preparation through research education, training and career development programs, and involves both educational and research workplace environments.

Deriving the full benefits of diversity among learners, faculty, and researchers requires an appreciation of differences, understanding of conscious and unconscious assumptions, and effort to create a climate of mutual respect.

Learn more about how an NIH funded workforce that includes individuals from underrepresented backgrounds supports the NIH mission in the Notice of NIH’s Interest in Diversity.

This website addresses diversity from the NIH extramural perspective, that is, ensuring that the programs that we support take steps to broaden applicant pools so that persons from underrepresented backgrounds are aware of, and applying for, NIH support. Our definition of “diversity” includes the populations that are nationally underrepresented in the biomedical, clinical, and behavioral and social sciences, which are identified using an evidence-based process.

Learn more in the Notice of NIH’s Interest in Diversity.

Below we define what diversity means in the context of extramural programs. We also define other terms that are sometimes confused with this definition.

NIH recognizes that education and research opportunities may not be available to all, and as a result, some groups are underrepresented in health-related sciences on a national basis when compared to their peers among science-baccalaureate earners, among science-PhD earners, and in the biomedical workforce.

Diversity
Diversity—having many different forms, types or ideas; showing variety
Demographic diversity can mean a group comprised of people of different genders, races/ethnicities, cultures, religions, physical abilities, sexual orientations or preferences, ages, etc. This is much broader than the definition used for NIH extramural diversity programs, which is tied to enhancing the participation of groups identified as nationally underrepresented in the biomedical research workforce. See, Definitions: Diversity in NIH Extramural Programs, above.

Inclusion
Inclusion—the act of including; the state of being included
Inclusion in educational settings can mean ensuring that students with different physical or intellectual abilities are taught in the classroom with other students. More broadly, inclusion in the workplace requires the recognition and acceptance of strengths contributed by each and every employee. Often, the term “diversity and inclusion” is used when addressing the employer-employee or employee-employee relationship in the workplace.

Health Disparities
A population is defined by the Minority Health and Health Disparities Research and Education Act of 2000 (Public Law 106-525) as a health disparity or underserved population if there is a significant disparity in the overall rate of disease incidence, prevalence, morbidity, mortality, or survival rates in the population as compared to the health status of the general population.
Health disparities relate to population-based health. In contrast, diversity in extramural programs relates to the composition of the research workforce.