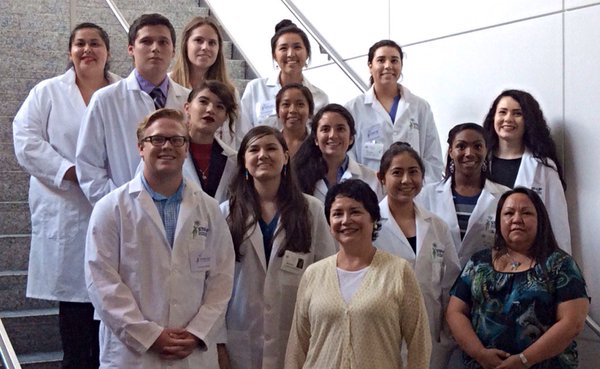 “There is a national need for minority scientists in the fields of biomedical, clinical, behavioral, and health services research.”-- Public Law 106-525, Minority Health and Health Disparities Research and Education Act of 2000. The National Science Foundation reports that African Americans (or Blacks), American Indians and Alaska Natives, Hispanics (or Latinos), Native Hawaiians and other Pacific Islanders are underrepresented at many career stages in health-related sciences on a national basis. (See the report Women, Minorities, and Persons with Disabilities in Science and Engineering, National Science Foundation, 2019). Individuals from these groups are under-represented when compared to their age-cohorts in science-baccalaureate earners, among science-PhD earners, and in the biomedical workforce overall.

In 2015, only 7 percent of science and engineering doctorate holders employed as full-time, full professors at all institutions were from underrepresented racial and ethnic groups, and at Research Intensive institutions, this proportion falls to only four percent. Moreover, among science and engineering doctorate holders with full-time faculty employment at any four-year institution, those from underrepresented racial and ethnic groups were less likely to receive federal grants or contracts than their white counterparts (See the report Women, Minorities, and Persons with Disabilities in Science and Engineering, National Science Foundation, 2019).

Underrepresentation is also apparent among physicians and physician-scientists in the biomedical workforce. The Association of American Medical Colleges (AAMC) reports that nationally underrepresented racial and ethnic groups comprise about nine percent of the US physician workforce; this poses important concerns for effective health care delivery. Among those with a medical degree, only about two percent report a career in research, and among MDs (or MD-PhDs) with NIH research grants, about seven percent were awarded to individuals from these underrepresented racial and ethnic groups.

Data on overall participation of individuals from underrepresented racial and ethnic groups in biotechnology, contract research organizations and pharmaceutical industry career sectors is not readily available. Job growth in these areas is strong, and several companies report a workforce with significant diversity, although there may be little diversity at the higher echelons of pharmaceutical firms (see the National Diversity Council’s “Leading While Diverse” report, below).

The following racial and ethnic groups have been shown by the National Science Foundation to be underrepresented in health-related sciences on a national basis: Blacks or African Americans, Hispanics or Latinos, American Indians or Alaska Natives, Native Hawaiians and other Pacific Islanders.  See data at http://www.nsf.gov/statistics/showpub.cfm?TopID=2&SubID=27) and the reportWomen, Minorities, and Persons with Disabilities in Science and Engineering).

In addition, it is recognized that underrepresentation can vary from setting to setting; individuals from racial or ethnic groups that can be demonstrated convincingly to be underrepresented by the grantee institution should be encouraged to participate in NIH programs to enhance diversity. For more information on racial and ethnic categories and definitions, see the OMB Revisions to the Standards for Classification of Federal Data on Race and Ethnicity.

Our Web site provides links to publicly available resources, including research publications and reports, websites and other information produced by non-NIH individuals, organizations and agencies. Linking to a non-NIH site does not constitute an endorsement by the NIH of the sponsors or the information presented on the site. References to resources should not be interpreted as favoring particular groups over others. Where a list of materials is provided, such lists should not be considered comprehensive, and NIH cannot attest to the accuracy of the information contained therein. Please also note that non-NIH sites may have different privacy policies than NIH sites.